skip to main | skip to sidebar
Welcome to Rima Purnama Sinthesia's Blog. "do better for earth.

mata gue (sedikit) bengkak because of 'a walk to remember" 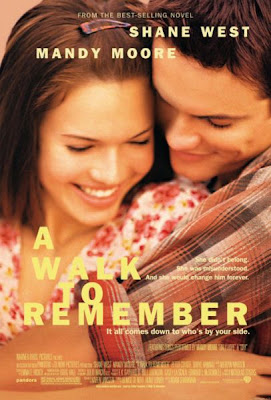 I’ve never seen this movie before, and all my friends commented on it. When I rented the movie to see him, I cried throughout the movie, I think it’s one of the most beautiful films I’ve never see.

A Walk to Remember is a 2002 romance film based on the 1999 romance novel with the same name by Nicholas Sparks. The movie was directed by Adam Shankman and produced by Denise DiNovi and Hunt Lowry for Warner Bros.

Each Spring in the little port town of Beaufort, North Carolina, when the wind smells of pine and salt and the sea, Landon Carter remembers his senior year at Beaufort High and Jamie Sullivan, the girl who changed his life.

Jamie was the last person Landon was likely to fall for. Serious and conservative, she was as far from cool as she could possibly be, and didn’t care. The daughter of the town’s Baptist minister, Jamie was not afraid of letting people know that her faith was the most important part of her life, even if it cost her some friends. Landon hung with the in-crowd — an aimless, moody, reckless guy who breezed

through school on looks and bravado. He had no plans, no future and no faith in himself.

One night a prank that he and his buddies set up goes terribly wrong and lands a kid in the hospital. As punishment, Landon must tutor a young student at a poor school and participate in the Drama Club’s Spring play ­ two activities the principal hopes will teach him some humility. They also happen to throw him into close contact with Jamie. Clearly in over his head, Landon is forced to ask her for help.

Soon, against his own expectations, Landon finds himself falling in love with this outwardly plain girl who possesses a passion for life he never imagined possible. But it isn’t easy. For reasons of her own, Jamie does everything she can to run away from romance until it becomes impossible to deny.